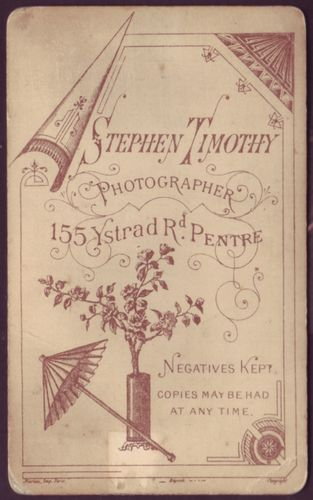 Stephen was born in Cardiganshire and was a carpenter by trade when he first came to Pentre. He married Mary Aubry in 1866 and is recorded as living at 155 Ystrad Road, trading as a photographer in the 1891 census. He later moved to 12 Bailey Street, Ton, and traded from various addresses in Ystrad Road until he retired following the death of his wife in 1921. He died aged 87 in 1945.

Stephen's elder brother, James, lived in Saw Mill Villas (now part of Ton Pentre FC premises) and ran the timber yard, whilst his younger brother, John, a blacksmith, became a cycle fitter and agent, and later the licensee of the Pictorium Cinema at the foot of Albion Street.

The gallery below contains a small selection of his postcards. He was well known for his selection of underground mining scenes as well as numerous views of the surrounding area. As more and more people moved into the area there must have been a great demand for these cards to send back to relatives and friends to show off their new "homes".